The ICTSA Programming Challenge 2010 was a 48 hour programming challenge held between the 26th - 28th February 2010. This year, the challenge given to the competitors was the following:

The aim of the challenge is to approximate images using a small number of circular blobs of paint. The images are all rectangular, with each of their constituent pixels ranging over a small number of colours (8). Facing an empty (white) canvas, of the same dimensions as the given image, an artist paints circular blobs of paint (each one possibly covering previously painted ones) in one of the 8 possible colours. The challenge the artist faces, is to end up with a painting similar to the original one, not using more than a given number of paint blobs. Your task is to automate the artist.

CasaSoft, represented by its directors, Mark & Karl Cassar have entered the competition and managed to obtain 2nd place in the industry section of this competition. The results were announced last weekend at the awards ceremony held on Saturday 6th March 2010 at Villa Bighi, Kalkara. 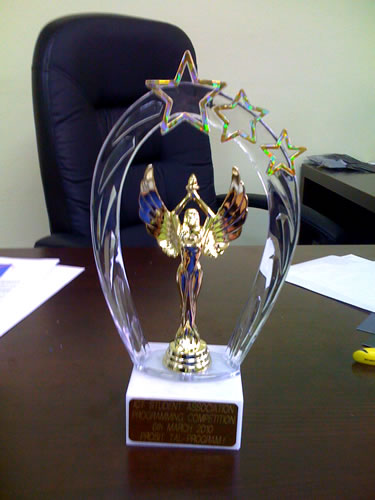